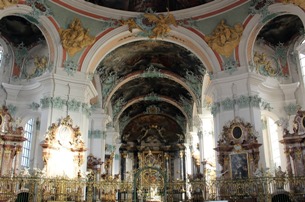 Prague Baroque is a widespread term in almost all tourist guidebooks. Architectural treasures from the 17the and 18th century can be found in the city centre on nearly every corner. Let us show you the most interesting ones on a day trip from Hradčany, through the Lesser Town and to the Old Town.

Start your Prague Baroque trip at Pohořelec. Many go to Prague Castle from there; however, you will go to Loretánské Square to take a look at the longest baroque building in Prague – the Černín Palace with its 150m long façade. Since 1934, the building has served as the Ministry of Foreign Affairs. On the other side of the square, you can admire the popular Loreta with the Church of the Lord’s Birth and the carillon from 1626.

Then walk down along the flagged Černínská Street to the picturesque New World (Nový Svět) to discover a magical settlement under the Castle, still hidden to tourists although it’s one of the most beautiful places in Prague. Walk along Nový Svět Street, which is full of cafés, and enjoy the local atmosphere. Many cultural personalities have lived there, and the place still has an artistic character. If you visit the area with children, stop by at a playground behind a thick wall; in the winter, however, it’s usually closed. On your way, you can admire the baroque houses whose names are often related to gold. Given the fact this used to be a shanty town, it’s a little paradox.

To see baroque, go to the Lesser Town

At the end of Nový Svět Street, you will pass the U Zlaté hrušky (The Golden Pear) house and get to Kanovnická Street leading to Hradčanské Square with a baroque plague column. Ignore the tourists heading to the Castle, and walk on to the opposite south-west corner of the square. Climb the Radnické Stairs to the legendary Nerudova Street with baroque façades and house signs.

Walk down to the Lesser Town (Malostranské) Square, where you cannot miss the gem of Czech Baroque: the Church of St. Nicholas. Don’t forget to look inside; the climb to the bell tower with a breath-taking view is a great experience, too. Then you can have a rest in the Wallenstein Garden (Valdštejnská zahrada) adjacent the Wallenstein Palace, the residence of the Senate of the Czech Republic and the largest baroque building in Prague. It was built in the 17th century, and it was said to be even more sumptuous than Prague Castle.

End the baroque journey in the Old Town

Leave the Lesser Town and cross the Vltava River on Charles Bridge with 30 baroque sculptures admired by people from all over the world for centuries. At the end of the bridge, you will see the marvellous baroque complex of what used to be the Jesuit College – the so-called Klementinum. Today, the building serves as the National Library. Inside, there are spectacular archives and probably the most beautiful baroque hall in the world, so the interiors are worth visiting. What a pity that Křížovnická Street, right in front of the entrance, is so busy and that there is usually a traffic jam all day long…

Finally, go along Karlova Street, full of souvenir shops, to the Old Town Square. There you can end your baroque trip day in a great style: in another Church of St. Nicholas, designed by architect Kilian Ignatius Dientzenhofer in the first half of the 18th century. The church is open to public, and there are concerts of classical music in the evening.