Albertov – settlement since the prehistoric times 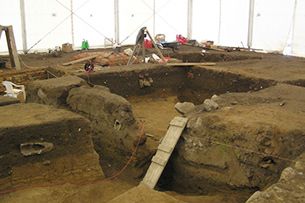 Do you know you live in a place with ancient history? Before the construction of Albertov Rental Apartments, an extensive archaeological survey was conducted which showed that the site has been inhabited since the prehistoric times more than 7,000 years ago.

Thanks to the survey, the estimated presence of the Celts in this part of Prague was proved. However, the most extensive human activity did not start until around the 11th century when the site became part of the settlement below Vyšehrad castle. There were furnaces for iron making and pits for mining sand that was used in the production. In the following century, silver and non-ferrous metals probably started to be produced there.

After the founding of Prague New Town, the settlement with metallurgical production ceased to exist. And when the settlement below the castle was devastated by the Hussites, the site was used only for agriculture until the 18th century. In the 19th century, small industrial facilities were built on the site. The largest one was a leather dye-works.

If you are interested in the details about the archaeological research, you can read more on the panels at the entrance to the reception. You can also see several exhibits from excavations in the showcases.