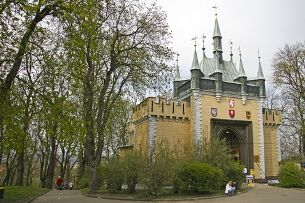 The attraction includes three halls. First, you’ll get lost in the system of mirror tunnels only to get to its centre and relax there, looking at the three-dimensional diorama. Its plastic foreground depicts a scene on the Charles Bridge at the end of the Thirty Year’s War, when the Swedes laid siege to Prague; in the background, you can see a painting of Hradčany, the Prague Castle district. In the last room, you’ll find yourself in the hall of laughter, where you can chuckle at the distorted reflections of yourself. You’ll have so much fun you won’t want to leave.

When was the mirror maze built?

The maze dates back to 1891 when it was built as part of the representative pavilion of the Czech Tourists Club at the Jubilee Regional Exhibition in Prague. The original idea was inspired by the mirror maze in the Vienna Prater. The building copies the 19th-century neo-Gothic style, resembling a small castle from the outside. Originally, it was attached to the Industrial Palace at the Prague Exhibition Grounds; two years later, it was moved to the top of Petřín Hill, next to the lookout tower.

How to get there?

Petřín Hill is accessible in many ways and open to the public. To reach the orchards, leave at Pohořelec, where you can stop at the Strahov Monastery, and walk along the contour line to the Petřín lookout tower and the maze. You can also take a bus from the Anděl bus stop to Strahov and walk past the student halls of residence to the hilltop. Or, you can walk from the Lesser Town and take the funicular from Újezd to the top of Petřín Hill.