Home » Stromovka: a matter of many Praguers’ heart

Stromovka: a matter of many Praguers’ heart 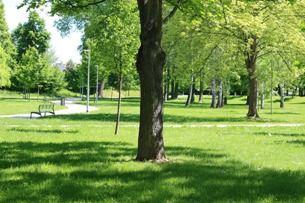 Stromovka is an amazing park in the heart of Prague where you can spend a whole afternoon on a romantic walk with your partner or playing with children. Here are a few tips where to go and not to get bored near the ponds and greenery.

The Royal Game Reserve, called Stromovka by everyone, is located on the left bank of the Vltava River between Holešovice and Bubeneč. It was established in 13th century when it served to monarchs as a hunting game park. A Gothic summer residence was built there, too (its current Renaissance form comes from the 16th century). Stromovka was not opened to the public until the beginning of the 19th century. Since then it has been one of the most popular places for relaxation in Prague.

Stromovka has problems with the waterlogged soil, and the problem got even worse after the destructive flood in 2002. Six years later, it culminated with a soil slump when the Blanka tunnel, which is part of the Prague City Ring and goes just under Stromovka, was being built. A 10-meter wide crater then scared both inhabitants and local representatives who decided to build four new ponds there.

Today, the ponds with rafts and benches nearby are a great attraction for children and adults alike, though they have a practical function as well. In the 18th, century, a now vanished pond of Rudolf II used to be in this place. Like their predecessor, the current ponds help with soaking of the park, and their supply is solved by the historical, yet fully functional mechanism of the Rudolf tunnel (more than a kilometre long underground tunnel from the 16th century going under Letná to the Vltava River near Štefánik Bridge).

Where to have some refreshment in Stromovka?

After the legendary Šlechtova restaurant in the centre of the park was closed, there are no ‘refreshments stations’ and facilities with toilets which is a pity. The only place where you can stop by for a drink and a good meal is near the exhibition grounds (Výstaviště). The Vozovna restaurant with its original playground is very popular especially among families with children. Since it has no competition, it is always full and busy and it’s not a great place for those who like to enjoy their coffee in a calm environment.

But there is something even for them in the vicinity of Stromovka. In U Akademie Street, you can visit the cosy Café Lajka, which is suitable for children too; if you feel like beer with friends, go a little further to the Lokál pub on the corner of Nad Královskou oborou Street. Both the places are close to the entrances to the Stromovka park.

The planetarium or a playground?

You won’t get bored with children in Stromovka. Visit the popular playground on the elevated edge of Stromovka, near Nad Královskou oborou Street, which is divided into several parts according to the age and skills of children. Both toddlers and ten-year-old scamps will enjoy themselves there; moreover, the playground has heated social facilities with toilets, basins and changing tables. There is also a new reconstructed part of the playground, built according to the design from the 1960s and with elements created by sculptor Olbram Zoubek. Such a rarity is surely worth trying.

After a good romp, move downhill towards the Holešovice exhibition grounds: the Prague Planetarium is situated there. It offers a rich programme of screenings even for the smallest children from the age of three. Visitors will learn about celestial bodies and get answers to many questions such as “What causes day and night?” Tickets for the shows cost about CZK 150 (children pay half the price).

You may find yourself at a funfair or in the zoo

Just be careful when you go to Stromovka: in the spring, many parents are surprised by the noisy Matějská funfair which can be seen and heard from the exhibition grounds nearby. That can be quite hard to overcome. If you want to go to the Prague zoo through Stromovka, use the tunnel under the railway tracks that will take you from the main Stromovka path (on the pond level) to the bridge leading to Císařský island.

If you want to go to the Stromovka park, there are many ways how to do so. You can go on foot from Dejvice, where you can find an A line metro stop A, trams and buses, through Bubeneč to the paved sloping Gotthardská Street leading to the western part of Stromovka. Or you can go from the Letenské náměstí tram stop to the gates of Stromovka in Nad Královskou oborou Street. If you come from the city centre, you will probably go from the Výstaviště Holešovice terminal tram loop situated in the south-east corner of Stromovka.