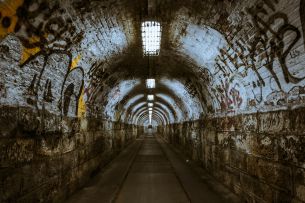 After World War II, European metropolises were ruled by fear. Prague was no exception – it built 800 nuclear fallout shelters on its territory in the 1950s and 1960s. One of the biggest ones, the Folimanka Shelter, is open to the public once a month, on a Saturday. The free tours are unforgettable.

Look for the entrance decorated by a graffiti artist

No underground structure in Prague 2 is bigger than this one. With the area of 1,332m2, the Folimanka Shelter is still fully functional and ready to accommodate up to 1,300 people. It has three entrances, but only one is accessible – opposite the house No. 2 in Ke Karlovu Street. It used to look like a garage, so it was easy to overlook but thanks to the graffiti, you cannot miss it today. The shelter is located under the eastern part of the Folimanka Park, 25 metres below the ground. The main axis of the shelter consists of two tubes, each 125 metres long, and adjacent technical rooms.

The visions of an apocalypse come to life

The guided tour will give you goose bumps. The plain rooms include fully functional toilets and filter-ventilation chambers to absorb dust and combat substances. The so-called oxygen rooms with pressure cylinders use the filtration system to keep the volume of oxygen in the air at 21 percent. And there is so much more to keep the shelter in operation, including the infirmary and the morgue.

When it comes to life, comfort is laid aside. The benches in the hallways are divided into 0.8m2 seats and there’s no privacy – there aren’t any door in the toilets either. At the time of construction, it was assumed that people will hide in the shelter for 72 hours at most and have medication in their evacuation baggage.

Tours of the Folimanka Shelter

The Folimanka Shelter was first open to the public in 2014. Since then, thousands of people have visited its corridors and rooms. They could learn more interesting information at various exhibitions and events presenting the issues of safety and protection of civilians. At present, the underground corridors are part of the exhibition about floods and large shelters. In the former infirmary, there is also the Folimanka cinema presenting orientation films about crisis situations and a document about the Cold War.

Reviews show that no visitors have been disappoint yet. The shelter may not be interesting to preschool children, but they can have fun at the large playground with water slides in the Folimanka Park. The guides (mostly military history enthusiasts) work as volunteers, and they will be happy to answer any questions and inquiries. Just watch out for conmen who ask for money – official tours are free and guided by experts.

The next opportunity to visit the shelter is near

The shelter is open to the public once a month. The next tour will take place on August 18; the shelter will be open from 9 a.m. to 3 p.m. Enthusiasits can download and print the detailed route plan of the Folimanka Shelter at its website. Admission is free and no reservations are necessary. While it may be surprising, the shelter is wheelchair accessible. Dogs are allowed as well. Don’t forget to bring warmer clothes, they can come in hand in the air-conditioned shelter.