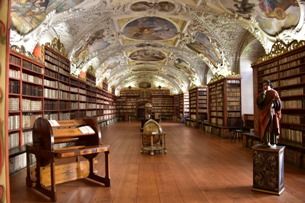 In the vicinity of Prague Castle, there is one of the most significant Czech architectonic monuments. The Strahov Monastery is fascinating not only from the outside, it has a lot to offer even in its historic interior.

The Royal Canonry of Premonstratensians at Strahov, which is the full name of the Strahov Monastery, is one of the most significant monuments in Prague. The Memorial of National Literature is located there, and it hosts a famous library and gallery with a valued exposition of fine arts from the 14th to the 19th century. The library and gallery are open to public every day from 9 a.m. to 5 p.m. (except for the lunch break); full admission to one of the two tours is CZK 120.

The cycle of plundering and reconstruction

The monastery was established under the reign of and assistance of Vladislaus II in 1143. It survived the plundering during the Hussite Wars in the 15th century, the attack of the Swedish army in the 17the century, bombing by the French in the 18th century, and even the deportation of the monks and the closure by the totalitarian regime in 1950s. The Strahov Monastery was finally reconstructed in 1992-1993.

The whole complex of the Strahov Monastery includes the Basilica of the Assumption of Our Lady, the Church of Saint Roch, and monastery and farm buildings. The local historic library and its depository hold 200,000 of books, manuscripts and incunabula. Its oldest part is the so-called Theological Hall from the second half of the 17th century with countless Bible editions and other theological literature.

Who lives at the Strahov Monastery?

It does not happen often but if you see a monk in a white robe somewhere around Petřín, Pohořelec or Prague Castle, it is probably a Premonstratensian from the Strahov Monastery. The ‘white monks’, as they are also called, have lived in the monastery since its establishment in the 12th century.

The order of the Premonstratensian monastic canons honours an ascetic way of life, its main task is preaching and priestly service to believers (confessions), and they work in charity, science and education. The order has also a women’s branch and its members work in parishes across the country. The Strahov Monastery is still regarded the Premonstratensian centre in Bohemia, also because there are remains of St. Norbert, the founder of the order, in the abbatial basilica (since 1627).

You can combine the visit of the Strahov Monastery with a walk to Prague Castle. Start at Pohořelec, where you can get by tram No. 22. You will enter the monastery either through the gate from the Dlabačov Street or via the hidden stairs between the houses No. 8 and 9 in Pohořelec Square. After the tour, you can leave the monastery through Petřín to Úvoz Street where you can go up the stairs to Loretánská Street leading to Hradčanské Square in front of Prague Castle.