The National Museum – silent witness and guard of Czech history 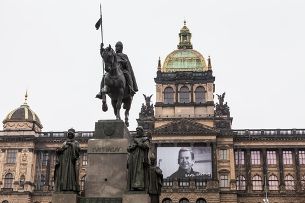 The exhibitions of the National Museum can be found in 11 buildings in Prague and five houses outside of the city. As for the historical significance, location and popularity, the monumental headquarters in Wenceslas Square is the most important. This article is mostly about this building.

There are more museums

When you say “The National Museum”, most people think of the building in Wenceslas Square. But extensive collections from various scientific disciplines, from natural history to social sciences, can be found in other places, too. After all, all of them couldn’t be stored in the monumental building in the city centre anyway.

The National Memorial at Vítkov, the Czech Museum of Music in Karmelitská Street, the new building of the National Museum in Vinohradská Street, the Náprstek Museum of Asian, African and American cultures in Betlémské Square and other thematic exhibitions are worth visiting, as well. Information on the current and permanent exhibitions can be found on the museum website.

The dominant of Wenceslas Square

The idea to build a national museum, the so-called “Patriotic Museum”, was announced by the representatives of the nobility and academic public in 1818. Initially, it had no building where the collections could be stored, so the items were collected in an Old Town convent and private homes. In 1876, a great place for the construction of the National Museum came along after the Horse Gate at the upper end of Wenceslas Square, part of the Prague fortifications, was demolished. However, there was still no project of the building.

The construction of the National Museum

The winning project was created by the architect Josef Schulz whose design included a pompous pantheon in the middle of the building. The construction of the neo-Renaissance building started in 1885, cost two million guilders and it was supposed to be finished in four years. Its spectacular decorations were created by prominent Czech painters and sculptors. However, the monumentality of the Museum overshadowed its functionality (it’s is surprising that the project didn’t include facilities for the depositary).

The National Museum is linked to many prominent Czech personalities. Palaeontologists, naturalists, geologists, travellers, senior aristocrats, priests and scientists (e.g. Bernard Bolzano, Emil Holub, Vojta Náprstek, František Palacký, Comte Kaspar M. Sternberg, and others) donated their extensive collections to the institution and made it famous abroad. On the façade of the National Museum, 72 names from the Czech history were memorialised in golden letters.

Permanent memory of the occupation

21 August 1968 made its black mark both in the history of Czechoslovakia and the Museum building. Czechoslovakia was invaded and occupied by the Warsaw Pact armies and the Soviet soldiers saw the National Museum as their target. Supposedly, they confused it with the headquarters of the Radio Free Europe.

The shelling damaged the façades, reliefs and the interiors of the building. In the 1970s, the gross distortion of the façade was fixed with stone fillings, visible even today. To remind the sad event, the traces of the fire in the façade will be preserved even after the current reconstruction is finished.

Although the National Museum survived occupation by the Nazis and the Soviet troops, the biggest threat to the building and its collections was brought on it by the Czechs. The busy highway, dividing the Museum from Wenceslas Square, is still the subject of passionate debates. The fact is that the architectural gem suffers from excessive noise, dust and shocks because of constant traffic jams. However, all the efforts to solve the problematic Prague transport and create ideal conditions for the preservation of the cultural heritage has failed so far.