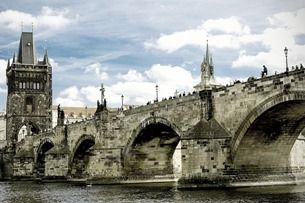 There are only a few so impressive Gothic buildings like the Old Town Bridge Tower in Prague 1. The gate between the Charles Bridge and the Old Town was built by Emperor Charles IV. It was designed by Petr Parléř. The commission had to meet the main criterion: the bridge was supposed to look like a triumphal arch pass by the Czech kings on their coronation way to the Prague Castle.

The legacy of Emperor Charles IV.

From the second half of the 14the century, the construction of the 48 metres high tower was supervised by Parléř’s son-in-law, Michael Savoyen, and about a hundred stonemasons took part in its completion in the course of the years. The Old Town Bridge Tower did not have the roof and four tower as we know them today until the thorough reconstruction led by Josef Mocker in the mid-19th century.

On the tower, you can see the coats of arms of the lands Charles IV used to govern. The most significant ones are in the middle: the black eagle on the golden field (Charles IV as the Roman Emperor) and the silver double-tailed lion on the red field (Charles IV as the Czech king). Moreover, the Old Town Bridge Tower is decorated with the statues of Charles IV and Wenceslaus IV, and St. Vitus, St. Adalbert and St. Sigismund.

Nothing on the tower is a coincidence

The stone statues and precise decorations of the tower are full of elaborated symbolism. If you come to the Old Town Bridge Tower on St. Wenceslaus Day (15 June), look at the triangular shield above the statue of the saint. There is the Czech lion, and St. Vitus’ eagle is pictured under him. In the right moment, the head of the lion shadows the chest of the eagle to symbolically seal the union of Bohemia and Moravia.

The lowest displayed statues represent animals and mythical creatures in a fight. On the corners of the tower, about two metres above the ground, we can see the small statues of a lecherous man and an undressed woman referring to the earthly life in sin.

A display window of the beheaded

In the turbulent year of 1621, the Old Town Bridge Tower became the main threat of the political agitators of that time: the cut-off heads of the 12 leaders of the Bohemian Revolt, beheaded at the Old Town Square, hanged there. The heads were taken down after more than a decade and nobody knows where they were buried.

A visit of the tower with a beautiful view

If you want to look around Prague from the tower gallery, you have to climb the 138 stairs on its spiral staircase. From the first floor, the gate used to be closed by lowering an iron grating; the second floor was used as a prison for ‘worthier‘ defaulters.

The Old Town Bridge Tower is an entrance gate to the Charles Bridge from the west bank of the Vltava river. It is located in Prague 1 at Křížovnické Square, which is on the tram line between Karlovy lázně and Staroměstská stops. It is only a few-minute walk along Křížovnická Street from the nearest metro station (Staroměstská, line A).