Home » The Prague astronomical clock: more than 600 of mysteries and secret symbols

The Prague astronomical clock: more than 600 of mysteries and secret symbols 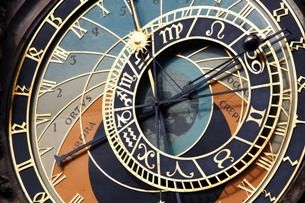 If you moved the Old Town astronomical clock somewhere else, it would not work. You would have to configure it again according to the new location. And Prague and Old Town Square would lose a unique sight that has amazed thousands of tourists and locals every day for more than 600 years.

ATTENTION!!! From April 2017, the exterior of the Old Town Hall, including the astronomical clock, is under reconstruction and surrounded by scaffolding. The clock is projected onto a canvas that will cover the tower for about five months. The reconstruction will end in September 2018, just before the celebrations of the 100th anniversary of the establishment of the Czechoslovak Republic.

Visit to the astronomical clock

To see the clock, come to the southern side of the Old Town Hall on the hour, from 9 a.m. to 9 p.m. After chiming, you will see the 12 apostles with typical their attributes in two little windows. On the left side of the clock, there is the moving figure of the Vain Man looking in the mirror and the Miser with a stick and purse. On the right side of the clock, you can see the Turk and the figure of Death, measuring time with an hourglass. The performance ends with the crowing of a gilded rooster (the sound is produced by compressed bellows when the windows are closed).

It is unbelievable how much information the clock shows. Its base is the so-called astrolabe used by astrologers and seafarers since the ancient times. It is a predecessor of modern orreries and it shows the position of stars and planets on the sky, using two circles (moving rings).

The background colours of the astronomical dial represent the day (blue), night (black), and dawn and dusk (red), passed gradually by the Sun. The clockwork, driven by the astrolabe, and the figures have been barely changed since the Middle Ages.

A brief history of the clock

The first mention of the Old Town astronomical clock dates back to 9 October 1410. The royal clockmaker Mikuláš of Kadaň built a clock for Prague according to calculations by the mathematician Jan Šindel at that time. The time on the clock could be read in three different ways. In 1490, the clock was decorated with the popular figure of Death and the calendar plate created by master Hanuš that was manually shifted every midnight the next day. The Old Town astronomical clock was fully mechanical in 1566.

During the reign of Joseph II, the Old Town Hall became the seat of the City Council. During its extensive reconstruction, it was even suggested to throw the clock away! Fortunately, it was saved and it is now one of the most popular attractions in Prague.

What is the original and what is a copy?

In 1866, the astronomical clock got a large modern chronometer which became its “brain”. It was also decorated with a new calendar created by the painter Josef Mánes. Its artistic value was so great that it was soon replaced by a copy due to concerns it could be damaged.

The clock underwent several restorations, but it was devastated by the Nazis during the last days of World War II. The burnt figures of the apostles had to be completely replaced with new ones made from linden wood by Vojtěch Sucharda. In the 1970s, all the external sculptures decorating the astronomical clock were replaced with copies and stored in the Prague City Museum.

What time is it?

Do you want to know how to read the astronomical clock? This clock is for true connoisseurs. The great Old Town astronomical clock shows three different times: • The old time was measured from sunset. It is divided into 24 equal pieces. It is represented by gold Gothic numbers along the perimeter of the large ring. • The Babylonian time is a unique feature of the Prague astronomical clock. No other clock in the world can measure it. It is calculated from sunrise to sunset, so it has a variable length according to the seasons. The uneven or Arabian time, as the Babylonian time is also called, is represented by less noticeable black Arabic numerals from one to twelve at the top of the astrolabe (above the horizon). • The common time (CET) we commonly use is represented by golden Roman numerals along the perimeter of the smaller circle and shown with a dominant golden hand. Since 1948, the clock chimes every hour.