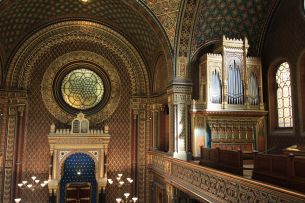 The Prague Jewish Quarter, admired by tourists, tends to be rather neglected by the locals. The beautiful Oriental interior of the Spanish Synagogue and the engaging exhibitions of the Jewish Museum are certainly worth the admission fee! To visitors, they are the top cultural sights in Prague.

The most famous Jewish address

Before the WWII, 54,000 Jews used to live in the capital city, but only a third of them survived the holocaust. The Jews have lived in Prague for centuries; in the Middle Ages, the largest Jewish ghetto in Europe was situated in where Josefov and the Old Town are today. Due to poor sanitation the city councillors ordered its demolition at the end of 19th century.

Some synagogues were torn down before the World War I, others were devastated by the Allied air strikes at the end of World War II. Fortunately, some prayer rooms have survived. Today, the Jewish quarter is a rare cultural area in the centre of Prague.

The oldest site, the most modern building

The Spanish Synagogue was built in 1868, and it is the most modern one in Prague. It was built on the site of the so-called Old School from the 12th century. The purpose was to increase the capacity of the prayer room and meet the needs of the growing Jewish community. Architects Vojtěch Ignác Ullmann and Josef Niklas designed the synagogue in the Moorish style, quite often used in the Middle Age Spain – hence the name of the building.

Cultural events in the Spanish Synagogue

During the WWII, the Spanish Synagogue served as a storehouse of assets stolen from the Czech Jewish communities. In the 1990s, the synagogue was renovated, and it is now managed by the Prague Jewish Museum. It has become a popular architectural, cultural and spiritual sight.

The interior with gilded walls, a square ground floor and a large dome is often frequented by lovers of classical music. Thanks to the excellent acoustics, concerts in the synagogue are an unforgettable experience. The permanent exhibitions of the Jewish Museum in the synagogue are also worth visiting: The History of the Jews in Bohemia and Moravia in the 19th and in the 20th Century and Synagogue Silver from Bohemia and Moravia.

Tickets to the Spanish Synagogue can be bought either separately for CZK 70, or as part of the popular guided tour around the Prague Jewish Quarter – the prices range from CZK 200 to 500. All sights in the Jewish Quarter are usually open from 9 a.m. to 5 p.m. On Saturdays and Jewish holidays, they are closed (the opening hours for individual synagogues can be found on the website of the Jewish Museum in Prague).

The main sights of the Jewish Quarter are within walking distance from the Old Town Square where you can find the green metro A line station, two tram stops (18, 17), and two bus stops (194, 207). The U staré školy bus stop (194) is located right in front of the Spanish Synagogue.