Home » The Vávrova vyhlídka lookout: beautiful Prague on the surface and secrets in the underground

The Vávrova vyhlídka lookout: beautiful Prague on the surface and secrets in the underground 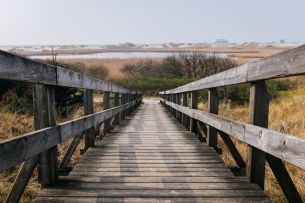 You can hardly find a wider and more remarkable view of Prague than the one from the Vávrova vyhlídka lookout. The two metres high platform designed by the popular architect is the highlight of a walk through the Dobeška forest park near the Bránické rocks with a view of the Vltava valley and Prague panoramas.

The Vávrova vyhlídka lookout is an enchanting place in the conservation area of the Bránické rocks, situated between the Dobeška villa hamlet and the Vltava River. From there, you can see the Barrandov hills on the left, the hillsides over Smíchov, Dívčí hrady, Petřín, Prague Castle, Bohnice, and Vyšehrad and Kavčí hory on the right.

Plans that did not work out for the Nazis

The Bránické rocks are fenced for security reasons. The whole area a rich in fossils of cephalopods and trilobites, and it has been a natural monument since 1968. The area has about nine hectares, and rare thermophilic animals and protected plants can be found there. You can come across lizards and a unique species of snail, kestrels are nesting there, and bats spend the winter in the drifts of the Bránické rocks.

There was extracted limestone till 1928, and Nazis built here a huge underground factory, which was sheltered from a potential bombing, during the WWII. Many legends are connected to the factory, however, it was never put in operation. Only an ingenious drift system with seven tunnels, which entrances with steel doors were buried by stones, remained there.

The Sklep theatre, co-founded by David Vávra when he was fourteen, has its home stage in the nearby Dobeška theatre. Today, the iconic theatre with many well-known Czech actors attracts much attention, and so does the personality of the actor, writer and architect David Vávra. He was born in the area, and designed the two metres high wooden platform on the Bránické rocks. With the lookout, he paid tribute to the beautiful location where he has lived since his birth.

The lookout place is situated near the longshore road between Modřany and Podolí, in Prague 4 – Braník. When coming from the Vltava River, walk from the Přístaviště tram stop to the lower part of the rocks. Pass the wooden evangelical church from 1948, and walk through a forest jungle to long stairs leading to the Vávrova vyhlídka lookout. If you want to skip the climbing, use the bus 128 to the Dobeška stop. Behind the stop (about 70 metres), take the path in the pine forest leading to the lookout.