Home » The Vinohrady Theatre: More than 100 years in the centre of Prague’s cultural life

The Vinohrady Theatre: More than 100 years in the centre of Prague’s cultural life 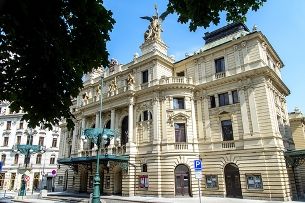 The Vinohrady Theatre was opened in 1907. It was designed by the architect Alois Čenský who won the anonymous architectural competition of twelve projects several years before that. The construction of the dramatically awaited theatre building took only two years. The second Czech theatre (after the National Theatre) could accommodate 1,250 to 1,350 spectators and it is still the leading drama scene in Prague.

More attractive than the National Theatre?

The first director of the Municipal Theatre in Královské Vinohrady, as was the original name of the Vinohrady Theatre, was František Adolf Šubert. Thanks to his rich experience in the management of the National Theatre (1883-1900), he was the ideal candidate for the new theatre. Under his baton, the theatre soon gained at least the same popularity as the National Theatre. The side alley next to the Vinohrady Theatre, Šubertova Street, was named after him.

A theatre guided by two angels

The theatre premises were originally designed for drama, opera and operetta. However, the opera and operetta ensembles left the building already in 1919. At first glance, you will notice two impressive features on the theatre roof – the allegorical statues of angels. They were created by the academic sculptor Milan Havlíček: the sword statue symbolizes Bravery, the mirror one represents the Truth.

Nazi devastation and the spirit of socialism

Both the statues seem to have predetermined the history of the Vinohrady Theatre. During the World War II, it experienced the official closure, the arrest of its employees by the Gestapo, and the plundering of the interior by German propagandist film-makers. In the 1950s, the Vinohrady Theatre belonged to the Czechoslovak army and the character of the repertoire changed in the Soviet style.

In the 1960s, the director František Pavlíček pressed his suggestion to use the current name of the theatre and managed to preserve the high quality of the ensemble and performances. After the Velvet Revolution, the actress Jiřina Jirásková was elected head of the Vinohrady Theatre (until 2000); the current director is the actor Tomáš Töpfer.

How to get there?

The Art Nouveau building of the Vinohrady Theatre dominates the north side of the Náměstí Míru Square in Prague 2. To get there, you can take trams 10, 16, 22 or 23 or the green metro line A. From the tram stop, go towards St Ludmila’s Church, pass its entrance, and you will see the theatre building right behind the busy street on the edge of the square.

If you go by car, you can park in the side streets near the theatre or in the area behind the building, but parking places are very limited and they are almost always occupied.