Home » The Vyšehrad cemetery and Slavín – the unique resting place

The Vyšehrad cemetery and Slavín – the unique resting place 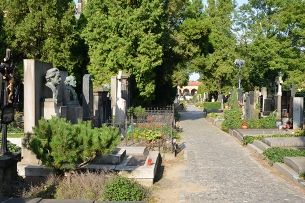 If you visit the Vyšehrad cemetery, you’ll find a stellar company. Prominent artists and scientists are buried there, either in separate graves or in the memorial tomb of Slavín. Do come closer and learn more about the Czech history. Every tombstone is a work of art. The cemetery atmosphere cannot be found in any museum.

In Vyšehrad, people have been buried since the 13th century. In 1870s, the former parish cemetery of the Vyšehrad chapter became an important burial site.

Since then, over 600 Czech personalities from of culture, science and technology were buried in the 80-hectar area at St. Peter and Paul’s Cathedral. The northern and western sides of the cemetery are lined with neo-Renaissance arcade hallways, many graves are decorated with artistic ironwork, and some of the unique tombstones were created by famous sculptors, e.g. Josef Václav Myslbek.

The list of Czech writers, composers, painters, sculptors, singers, actors, scientists and athletes buried at this place would be nearly endless – let us mention, for example, the actor Vlasta Burian, the composer Bedřich Smetana, the writers Božena Němcová and Karel Čapek, the poet Vítězslav Nezval, the chemist and inventor Jaroslav Heyrovský, or the football striker Josef Bican. There are also the symbolic tombstones of the painter Josef Čapek, tortured to death by the Nazis in a concentration camp, and the politician Milada Horáková who fell victim of the judicial murder in the communist trials in the 1950s.

The tomb of Slavín is the monumental dominant of the cemetery. It was initiated by the historian and politician František Palacký, designed by the architect Antonín Wiehl and built in 1889-1893. It took another eight years before the first literati were buried there. Later, the memorial served also as a burial place for artists, scientist and politicians.

The tomb in the eastern part of the Vyšehrad cemetery cannot be missed. A wide yellow granite staircase with a massive railing leads to the memorial with allegorical statues. At the top of the monument, you can see the winged statue of “The Motherland’s Genius”; on the left, there is a statue of “The Grieving Homeland”; on the right, “The Cheering Homeland”. In the building, there is a crypt with 44 burial cells for coffins and urns.

50 prominent Czech artists are buried in the vast Slavín tomb. On the front part of the monument, you can read 15 names of those who were buried the first. The very first one was the poet Julius Zeyer, buried in 1901. Other names were engraved on the black wall panels – the poet Jaroslav Vrchlický and the writer Marie Pujmanová, the actors Jaroslav Marvan and Karel Höger, the painters Vojtěch Hynais and Alfons Mucha, the opera singer Emmy Destinn, the architect Josef Gočár, and others. The names are linked with the motto carved on the Slavín monument: Although they died, they still speak.

However, not everyone wished to be buried at Slavín. For example, the body of the writer Jan Neruda was later moved to the nearby grave after protests of his family and, apparently, according to his wishes.