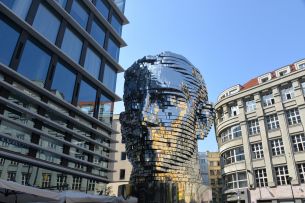 An expensive advertisement hoarding, or a piece of art representing of the 21st century? The shiny statue of Franz Kafka near Národní třída Street has both its fans and haters – but its author, controversial Czech artist David Černý, is already used to it. In the three years of its existence, this modern statue has attracted much more interest than the traditional sculpture of Franz Kafka in the quiet quarter of Josefov.

A busy place in the heart of Prague

The public space in Národní třída Street used to be full of small stalls selling fast food and costume jewellery. It also used to be a popular meeting point, and even today people use the phrase “See you at Máj” – which was the name of the socialist department store that used to stand there. Recent architectural changes, including the new statue of Franz Kafka, have made the place even more popular. The place is busy all day and night.

An expensive building at a traditional meeting point

The construction of Quadrio, the department store and office building, cost CZK 3.1 billion and lasted two years. It was opened at the end of October 2014. The small square behind the complex, dominated by the moving face of Franz Kafka, which is almost 11 metres high, has become a new public space.

The rotating head of Franz Kafka consists of 42 levels driven by 21 motor modules, moving independently and changing the form of the statue. The statue weighs the incredible 39 tonnes, 24 of which is stainless steel with shiny gloss. The private investor has paid USD 30 million for it.

Critics miss the connection to Kafka

David Black is the author of other controversial statues in Prague, for example, the statue of King Wenceslas Riding and Upside-Down Dead Horse with its head upside down in the Lucerna Palace near Wenceslas Square or the Black Babies on the Žižkov Tower. The shiny head of Franz Kafka is criticized for its intellectual vacuity or no connection to the writer. The fans of statue point to the obvious reference to Metamorphosis by Kafka and the German writer’s multi-layered writing. “Only time will tell if people like it,” admits the investor.

Just a few yards from the statue of Franz Kafka, there are escalators from the yellow metro B line (Národní třída station). There is also a tram stop (Národní třída) in Spálená Street for two main tram lines criss-crossing the capital centre, trams No. 22 and no. 9. To get to the small square dominated by the statue of Franz Kafka, walk through the Tesco department store or the modern Quadrio complex towards Jungmannova Street. If you go from Národní třída Street, use the passageway behind the Václav Špála Gallery to Charvátova Street.

Do you miss the contemplative soul of Franz Kafka in David Černý’s work? There is one more statue in honour of this existential writer in Prague. It’s situated close to Pařížská Street that connects the Old Town Square with the Vltava waterfront, at the crossroads of Vězeňská and Dušní Streets. The Kafkas lived in Dušní Street 27. Franz Kafka spent most of his life in this neighbourhood.

The sculpture of two “bodies” is basically an empty suit bearing Franz Kafka as a child on its shoulders. According to the author, sculptor and painter Jaroslav Róna, the statue shows “the spiritual split the author describes in his texts”. Róna was inspired mainly by Kafka’s novella Description of a Struggle.

The bronze statue of Franz Kafka in Dušní Street was unveiled at the end of 2003. It is 3.75m tall and it weighs 800kg. The project cost CZK 4 million, and it was financed by the Franz Kafka Society, supported by the Prague City Hall. Thanks to its location in the romantic and quiet location between the Church of Holy Spirit and the Spanish synagogue, it is an adequate counterpoint to the glitzy head in the busy city centre.