Home » A must-see in Prague: the Charles Bridge at night!

A must-see in Prague: the Charles Bridge at night! 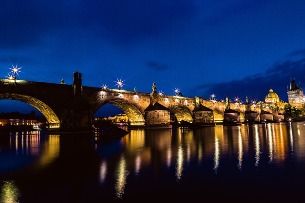 The Charles Bridge is one of the most popular sights in Prague and a must-see for all tourists. Crowds of people are flowing there from the early morning until late at night. But its real magic is revealed only at night. In the late hours, legends come to life and the walk along the bridge becomes an experience indelibly kept in your memory.

Forget about weaving your way through the crowds of tourists, street artists and souvenir vendors. After midnight, you’ll have the Charles Bridge, the Old Town bridge tower and Křížovnická Street only for yourselves. And it’s worth it.

The lights will take you back in time

Not even the Sun’s rays show the Charles Bridge in such a beauty like the public lighting. Gas street lamps will make you feel like living in the past. Each of the 30 statues becomes more magical in the lights located on the stone railings. The scenery is breath-taking. Walk along the bridge at night and enjoy all the 516 metres of its length and 10 metres in width without any disturbance. Can you feel the secret the bridge has been shrouded in for hundreds of years?

Legends or the centuries-old truth

The legends of the Charles Bridge are still alive. The one about eggs used in mortar has been refuted by experts though. Another legend says that the foundation stone was laid at the moment determined with the help of astrology that promised a favourable constellation of the Sun and Saturn. What is there to say? The bridge has been connecting the banks of the Vltava River since the turn of the 14th and 15th century, it has survived several floods and every day, it faces an incredible amount of traffic. The universe forces do seem to be favour it.

A hidden place of pilgrimage

The bridge is safeguarded by the statues of saints, led by St. John of Nepomuk. He was toppled into the river here in 1393. The bronze relief on the statue pedestal is currently the greatest attraction of tourist guides. Touch it, and all your wishes will be granted – or so they say.

The actual site of the saint’s death is, however, a little further to the centre of the bridge. The tragedy is commemorated with a two-armed cross on the stone railing. If you don’t look for it, you might easily overlook this secret symbol. According to the legend, you’ll deserve the saint’s affection and life happiness if you touch it.

On the left bank of the Vltava River, the Charles Bridge is most easily reached from the Lesser Town Square (and the tram stop of the same name, reachable by nightly lines 53 and 57). From the opposite river bank, take a tram at the Karlovy Lázně stop (night line 53) or the Old Town underground station, the green A line.