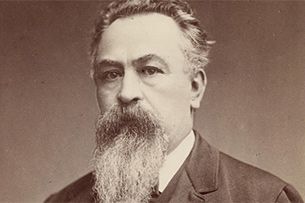 Albertov – a name of a tram stop, a name of a street connecting streets Na Slupi and Ke Karlovu, a name of a whole city quarter. Even our complex of furnished apartments for rent uses this name – Albertov Rental Apartments. But do you know what is the story behind this name?

They are all named after Eduard Albert who was born in 1841 and became a famous surgeon and a professor at University of Vienna. Furthermore, he was also a poet, translator, and he took an active part in Czech cultural life. A man with a broad range of interests.

Albert came from a Czech town Žamberk. As soon as he graduated from a high school he moved to Vienna to study medicine. His strong will and determination became apparent already during his study days. The dark side of this striving described his fellow doctor Svítil-Karmík: „Unfortunately his night studies supported by drinking a lot of coffee that lasted for years took its revenge in premature sclerosis.”

When he was 32, he was appointed to professor of surgery in Innsbruck in Austria. His zeal for surgery practice as well as his own medical research continued here as well. He became a pioneer of antiseptic in the Austrian Empire. It is difficult to imagine how surgery look liked in the second half of the 19th century when contemporary standard processes were just appearing.

He wrote his opus magnum in Innsbruck, a student book of surgery in four volumes. It took him whole eight years to complete this work. It arose interest and acclaim in medical circles across the whole Europe. Albert’s student dr. Maydl remembers: “I recall how many days, a day after day with no exception, he spent sitting by his table in his study in a hospital, completely merged in impenetrable tobacco fumes.” Healthy life-style was probably yet undiscovered at those times.

In 1881 he applied for a position of director of the university hospital in Prague. Though he did not succeed, he soon received more prestigious position in Vienna. In Vienna he taught as well as carried out a private practice with a selected clientele of a number of leading aristocratic families and politicians.

Not only these days we complain how we are busy. In 1884 Albert wrote in a letter to his friend: “… just sit down somewhere in a small town or a village, far away from all that turmoil, struggle and striving and linger at home – at my own heart.” Later he was often coming back to Žamberk, to the city where he was born. Here he built also his summer house. He was interested in history of Žamberk and together with a priest K. Chotkovský wrote A History of the City Žamberk.

He was frequently in touch with Czech cultural and politic elite, with the later first Czech president T. G. Masaryk, with a poet Jaroslav Vrchlický or a writer Alois Jirásek. He was translating Czech poetry into German as he strove to promote Czech culture in the German speaking world. He himself became a poet later. Unfortunately, he did not see a book of his poems printed during his lifetime. A book of poems called On the Earth and on the Sky was edited by his friend Jaroslav Vrchlický after his death. A publisher wrote in a foreword: “It is interesting that these first poetical endeavors were written during the last year of his life, almost at his sixties when inspiration of other poets is often at the end.”

Eduard Albert died unexpectedly aged 59 in his home in Žamberk.