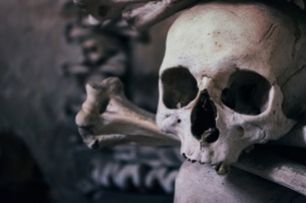 Are you thinking where to go at the weekend? We have two great tips for trips not far from Prague – one for culture and history lovers, and one for die-hard tramps and boundless romantics. To which category do you belong?

Sightseeing in the medieval town of Kutná Hora

This town in the Central Bohemian Region has more than 20 thousand inhabitants and abounds in real architectonic gems. The centre of the town, with St. Barbara’s Church and the Cathedral of Our Lady in Sedlec, was added to the UNESCO World Heritage list in 1995.

Kutná Hora was founded at the end of the 13th century and the name of the city literally means “a mining mountain”. At that time, a third of silver and silver ore in Europe was mined in this town. Besides medieval architecture, many churches, a monastery or the ossuary, the town is also known for a brewery established in the middle of the 16th century.

This beautiful late Gothic church manifests the international fame of the town of Kutná Hora in the Middle Ages. St. Barbara’s Church bears the name of the patron of dangerous occupations, mainly miners. The construction works were started by Petr Parléř’s workshop in the second half of the 14th century; in the 16th century, however, they were stopped because there was no more silver in the local mines. The church, which can compete with the Prague cathedral, got its contemporary shape at the turn of the 19th and 20th centuries.

From Prague, you can get to Kutná Hora in an hour by car. You can also use the comfortable train connection from the Prague Main Station. Besides the crooked streets in the centre, you will be also captivated by the varied programme of local museums and galleries. Experience the real magic of Kutná Hora outside of the tourist season. Otherwise, the town will be full of many other admirers of the local monuments.

A trip to the America quarries

If you prefer the nature over towns and cities, you should definitely visit the limestone quarries Small America, Big America and Mexico. They will enthral you with their colourful crags (Big America is sometimes called the “Czech Grand Canyon”), crystal clear lakes and a labyrinth of rock galleries in the underground.

The quarries are situated near the village of Mořina in the area of the Czech Karst. You can get there on foot from Karlštejn, where you can park your car, or you can take a train from Prague. Go through Karlštejn following the yellow touristic route, and on the crossroads under the castle, turn to the left, following the red route to the oak of Seven Brothers. There you can follow the yellow route again and the narrow path along the three biggest and most known quarries – Small America, Mexico, and Big America – to the village of Mořina where the path ends. You can return to the oak of Seven Brothers by following the blue route.

Curiosities of Small and Big America

The trip along the quarries takes three to four hours. The path is passable even for families with children, but you have to bring the refreshments with you. Remember that the quarries are a private property and swimming and fishing is forbidden, otherwise you can be fined CZK 15,000. The steep access to the water is also very dangerous and many people lost their lives for these adrenalin moments…

In the quarry sceneries, The Czech iconic films Lemonade Joe or Horse Opera, Accumulator 1 and many others were filmed. Although it is forbidden to enter the quarries, it is possible to arrange a guided tour of the legendary underground galleries with the owner – the Lomy Mořina company. Once a year, on the “European Day of Parks”, the administration of the Protected Landscape Area (CHKO) of the Czech Karst organises a public expedition to the quarries (this year, it was on May 20, 2017).