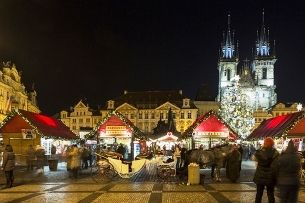 Not that Old Town Square is not interesting at other time. But it’s always full of tourists, so the locals usually cross the square quickly or avoid it most of the year. Their time will come with the Advent. Thousands of people come to Old Town Square to drink mulled wine and have a look at the Christmas tree. The lovely Týnská Street and the famous astronomical clock are just icings on the imaginary cake of Prague in winter.

Throughout its rich history, Old Town Square has always been a bustling marketplace. There is a vivid whirl even today, and not only because of the beautiful sights, but also due its unique atmosphere. Many passer-bys likes to sit in the local cafés to enjoy the magic of the oldest square in the centre of Prague. Do join them.

It is impossible to write about Old Town Square and not to mention the Old Town Hall with its world-famous astronomical clock. 15 minutes before every hour, crowds of onlookers gather together in the square and look up. With the first bell strike, two little clock windows open and both the 12 Apostles in the tower and the characters outside start moving. Besides the rotating Apostles, you will also notice the Death to the right of the dial, ringing the death knell and moving the hourglass. The stunning show ends with the sound of a crowing rooster at the top of the tower.

The religious landmark of the Old Town

The Church of Mother of God before Týn is an important part of the Prague scenery, as well. Its construction was completed after many years in the 1511. Jan Hus’s predecessors preached there and it also used to be the centre of religious changes, being the main church of the Old Town – initially, it was a shelter of the Hussite Church, and after the Battle of White Mountain, it was returned to the hands of the Catholics. Upon entering the temple, don’t miss the unique tin font and the final resting place of the famous astronomer Tycho Brahe.

History inscribed in the ground

Old Town Square has always been the scene of major historical events. The Town Hall windows witnessed the defenestration of officers which proved to be a gracious punishment in the light of future events. One shudders at the thought of 27 heads of aristocrats cut off by the executioner Jan Mydlář at the local scaffold in 1621 following the failed uprising of the estates and the final confirmation of the Hapsburg domination in the Czech lands. The bloody revenge of the monarch is symbolized by the 27 white crosses in the pavement near the Old Town Hall.

People vs. the ruling class

In the 20th century, Old Town Square was a traditional scene of power struggles and fight for independence. This is where people demonstrated against the Austro-Hungarian Empire and the Nazis. Today, public appeals to change the status quo at Old Town Square are not so common; protests usually take place in the nearby Wenceslas Square.

Take a tram or the A green underground line to the Old Town Square stop. Then, walk a few hundred metres down Kaprova Street to the St Nicolas’s Church. Right behind the church, you’ll see Old Town Square.