Home » The Lennon Wall: a public diary of both the bygone era and the present

The Lennon Wall: a public diary of both the bygone era and the present 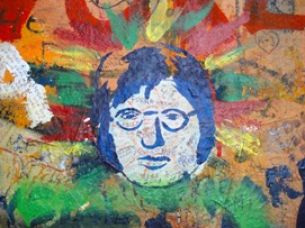 A diary of totalitarian history, a tribute to John Lennon or a street-art area for young generations? The cult garden wall, the so-called Lennon Wall nearby the Charles Bridge, is a symbol for many groups of people – drawing attention and living its own life for decades.

The inconspicuous wall in the centre of Malá Strana (Lesser Town) has become a spontaneous wailing diary of the locals already in the 1970s. There was deep normalisation in the Czech Republic at that time, and communists quickly wiped off any comments on the lack of freedom. But people never left the wall white for a long time and incessantly renewed the writings. During the Soviet occupation, the Lennon Wall was one of the many non-violent forms of free expression and fight against the oppressive regime.

How was the ‘Wailing Wall’ transformed into the ‘Lennon Wall’?

At first, it was called the ‘Wailing Wall’. It was decorated with love poems and anti-regime mottos. After John Lennon’s death of in December 1980, an unknown author paid tribute to his legacy on the wall and started an avalanche of other messages to the world-famous artist. In addition to writing extracts of the songs by the Beatles, people used to light candles and lay flowers at the wall. The rumours about the Lennon Wall spread fast among the inhabitants of Prague and even abroad, thanks to exile magazines. Every year, fans of the musician met at the wall to commemorate his legacy and draw attention to the totalitarian injustice.

A place for legal graffiti

After the Velvet Revolution in 1989, the wall was taken over by the original owners of the premises – the Sovereign Military Order of Malta. They had the wall decorated with a portrait of John Lennon and kept its character of a site for public expression. The new portrait quickly disappeared under a thick layer of messages, most of them about peace, love and other open-minded ideas so dear to Lennon. The wall has become a colourful attraction which lures tourists from all over the whole world. Unfortunately, there are more and more ‘ordinary’ messages of all kinds instead of deep quotes.

Repainting the wall: vandalism and graffiti the good side out?

In 2014, during the night before the 25th anniversary of the 17th November, a street-art formation of students repainted the wall white. There was only one sign on the wall – WALL IS OVER! The allusion to Lennon’s motto ‘The War is Over’ from the 1970s was supposed to the anniversary of the fall of the Iron Curtain. According to a representative of the graffiti artists, the intention was also to create space for new messages on the legal street-art site the Lennon Wall is now.

The first reactions were quite contrary though. Tourists searched for the colourful wall from guidebooks in vain, media wrote about vandalism, and the owner of the wall filed a criminal complaint against an unknown perpetrator. In a few hours, people started to write new messages on the white wall again. The students claimed allegiance to the act and apologised. The criminal prosecution, which would be investigate their act as a misdemeanour, was withdrawn.

The wall is not over!

The wall is still alive. As a British tourist aptly commented on TripAdvisor: ‘At first glance, the Lennon Wall looks like another graffiti-covered wall, but it has an important history for Czech people, partly as a memorial to John Lennon and his peace ideas, and partly as a symbol of free speech and youth rebellion. Apparently, the wall used to be covered with anti-Communist graffiti but is now covered with messages about peace and love.’

Where is the Lennon Wall?

The wall covered with messages, laments and wishes is on the outer side of the Maltese garden wall in Velkopřevorské náměstí Square. You will get there just in a few minutes – by foot from the Charles Bridge in Lesser Town, along Mostecká and Lázeňská Streets. The closest tram connection is at the Malostranské náměstí stop.