Home » The Petřín funicular: a tourist attraction and public transport

The Petřín funicular: a tourist attraction and public transport 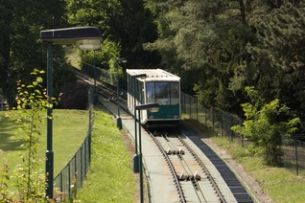 The Petřín funicular is one of the favourite Prague attractions. Take a ride from Újezd to the top of the hill and enjoy the view of Prague.

A rarity more than a century old

The funicular has been running since 1891. In the beginning, it used a water-balance drive system. Water was poured in the top carriage to outbalance the waiting bottom carriage (up to 3,600 litres) and the driver only had to brake. When water at the Petřín hill dried up in the summer, people had to go up on foot.

The operation of the funicular stopped during the First World War and it wasn’t used again until 1932 when it was powered by electricity. Later, the funicular was hit by another disaster – a landslide on the Petřín Hill in 1965. This time, it wasn’t used for twenty years. In 1985, it was reconstructed and re-opened as part of the Prague public transport.

The unique mechanism is as reliable as it was in 1932 when it was built. During the involuntary break between the 1960s and the 1980s, the employees of the Střešovice depot kept the mechanism in great condition outside of their working hours. Thanks to them, the machine had the required power and met all safety measures when it was put into operation again in 1985. Even today, you can see its gears behind the glass window in the upper station.

The funicular in numbers

The funicular track is more than 510 long and its maximum inclination is 298 ‰. Stopping at Újezd, Nebozízek and Petřín, the train unit of two carriages climbs 130 metres of altitude. With the speed of 4m/s, it will take you up the Petřín Hill in four minutes.

After the funicular was electrified in the 1930s, it could transport up to 2,600 people in an hour; currently, it transports about two million people per year. An interesting thing is the passage through the Hunger Wall built on the Petřín Hill in 1360-1362 by order of Charles IV to provide bread and butter to the poorest.

The funicular is open all year round (except for regular closures in spring and autumn) from 8 a.m. to 11 p.m. and runs at quarter-hourly intervals. You can also transport bicycles in the Petřín funicular. Unfortunately, it is not barrier-free.

The Petřín funicular is under technical maintenance twice a year. It is out of operation usually in March and October but it also depends on the weather. The regular checks are announced on the trams passing the Újezd Street stop. However, it might be too late for the confused passengers, so check if the funicular is not under reconstruction before you go to the Petřín Hill to avoid disappointment.