The splendour of the Vrtba Garden remains hidden from the crowds 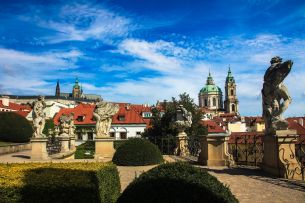 “Just when you think you already know Prague, you find a paradise,” said one of the visitors to the Vrtba Garden on Facebook. Breath-taking views of Prague Castle and St Nicholas’s Church: all this in beautiful greenery. The Vrtba Garden remains hidden from tourists. Those who find this place are fascinated by its romance and grace.

The Vrtba Garden was built on the site of former vineyards behind the Vrtba Palace in Lesser Town in about 1720. It was designed by Czech architect František Maxmilián Kaňka and named after the house of Vrtba who owned the adjacent palace situated between the garden and the busy Karmelitská Street.

The garden is unusually rugged, rising from the courtyard of the palace to the Petřín Hill slope, forming three stepped terraces with landscaped paths and many artistic elements.

A garden or a unique piece of art?

The Italian garden is decorated with sculptures by Matyáš Bernard Braun and frescos of Venus and Adonis painted by Václav Vavřinec Rainer. The founder of the garden, then the highest burgrave of Prague Castle, Jan Josef of Vrba, could afford to pay the most important artists of his time. In one of the Empire houses, Czech art painter Mikoláš Aleš lived in 1886-1889.

The allegorical scenes at the gateway include statues of Greek gods at the top of the garden. There is also a fountain, a two-wing staircase and manicured garden beds in symmetrical patterns. At the highest point of the garden, there is a small observation terrace. Other attractions of the Vrtba Garden include a bird aviary and sala terrena (the so-called open garden room, so typical for Baroque gardens) with a ceiling fresco and statues.

Since the mid-20th century, the Vrtba Garden has been listed on the UNESCO Heritage list. It was open to the public in 1998, and there is also a smaller gallery with amazing exhibition spaces. Thanks to its magic, the Vrtba Garden is a popular place for weddings and corporate events.

In the glare of the lights and the stars

A novelty is the ceremonial lighting of the Vrtba Garden at the beginning and end of the season. It is held only twice a year. The next opportunity to admire the illuminated sculptures by Matyáš Braun, the frescoes by V. V. Reiner, the studio of Mikoláš Aleš and the incredible views of Prague at night will be in the spring of 2018.

You can enter the quiet oasis in the midst of the bustling Lesser Town through the Wallenstein Palace in Karmelitská Street 373/25, between the tram stops Malostranské náměstí (Lesser Town Square) and Hellichova Street. The Vrtba Garden is open every day from 10 a.m. to 6 p.m. from April to October. The full entrance fee is CZK 65.